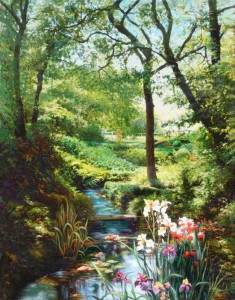 Art cannot be summarized in words or explained with theories.  There is something about the created object that conveys human perception and expression on a physical level in ways that can never be conceptualized.  The object itself is communication—an irreplaceable footprint of the soul’s presence on earth.

As artists, we are living legacies of those who created before us.  Many artists have inspired and influenced my work, but two of those who touched me the deepest on a personal level were gardeners.  One was the world-renowned portraitist, Douglas Chandor, who also created one the ten most celebrated gardens in America in my little home town of Weatherford, Texas.  He considered this his greatest work of art despite

the fact that he had painted all the US presidents living during the span of his career, Queen Elizabeth, and the various heads of state at the Treaty of Yalta, not to mention all the beautiful people and celebrities of his day.  The other artist was my mother, whose talents were many, from fashion design, to sculpture, but whose greatest work of art was her innovative solution for a fourteen-acre eroded and washed away tract of land in Weatherford.  Somewhat inspired by Chandor, and yet with her own ideas, she practiced the ideals of “zero-scaping,” Japanese gardening, and many of the naturalization practices of the Victorian gardener.  Stylistically, her garden is a bit eclectic, but well integrated as to purpose and passion.  It won many state awards, and drew attention nationally.  She built and maintained it along with the help and support of my father for thirty years, carrying on alone for fifteen years until her death at 93. 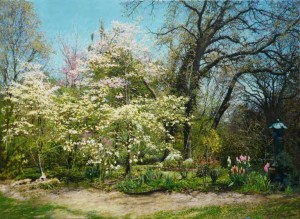 The paintings in this series are tributes to both of these influences, and most of the scenes are directly from my mother’s garden.   I present these as legacies of art and inspiration, as well as my own creative leap forward.  All of these paintings incorporate the principles discussed in my article, “More Than Meets the Eye,” and the color and technical treatments also discussed on other pages about my recent work.

There will be at least six paintings in this series, with more to come as inspiration leads.  Each painting will be offered in a series of 100 limited edition giclees in two sizes.  Those offerings may be found in our giclee store. 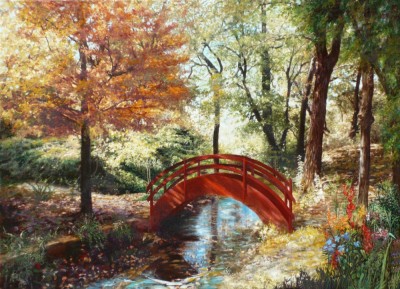 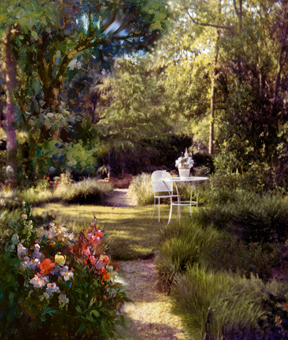