The Seventies were transformative for Glenda.  She would soar from fledgling artist to having a painting shown in the Metropolitan Museum, to being collected by the Smithsonian Institution and the Museum of the City of New York.  As a portraitist she would be given referrals by Thomas Hoving, Director of the Metropolitan Museum, and favorable comments by Clement Greenburg, preeminent critic of the New York Times.  She would paint numerous celebrities, and be exhibited by several galleries in New York City.   One of her solo exhibits would be visited by Georgia O’Keefe who would remark that Glenda was one of the most promising artists of her generation.

The Seventies were launched by Glenda’s joining the faculty of Tulane University and uniting in marriage with her first husband, Victor Koshkin-Youritzin.  Victor brought the extra dimensions of New York high society and Russian aristocracy.  Their wedding was announced in the society section of the New York Times, and their invitation list included members of the highest social registry.

This union was both elite and urbane, but most importantly Victor, as a graduate of Columbia and NYU, brought influential connections from the art world.  Their relationship was much like that of Alfred Stieglitz and Georgia O’Keefe, although Victor was an art historian rather than a photographer.  He was the first to recognize the world-class potential of this Texas-born prodigy.  He had the astute ability to help her grow, and provided the level of discernment that would facilitate her development.  Glenda and Victor spent most of their ten-year marriage in New Orleans and Norman Oklahoma in university teaching.

During this time, she would sign all her paintings as Glenda Youritzin.  She is also listed in numerous national registries as such.  Victor continues to be one of her greatest admirers.  He wrote the text of her Retrospective Exhibition Catalog in 1998, which is reprinted in full in the section of this website dedicated to “The Nineties.”

An exceptional ability that emerged while in college, which was summarily dismissed because it offended the current trends being cultivated, was that of portraiture.  Her understanding of human anatomy, depth of perception into human character and psychology, and meticulous realism made an extraordinary combination of power and sensitivity.  Those who teach art most often see only that which they can teach, while those who know art can see what is really there.

Therefore, as Glenda’s audience changed so did her confidence and accomplishment.  In 1970 she met Dr. Paul Peck, her first friendship with an internationally acclaimed artist.  He was astounded with her portraiture, giving her both instruction and encouragement as she had never received before.  She would spend the next five years primarily engaged in this genre on a rocket ride to success and renown in her own right.  Her third major portrait was of Senator Allen J. Ellender, President pro-tempore of the United States Senate. 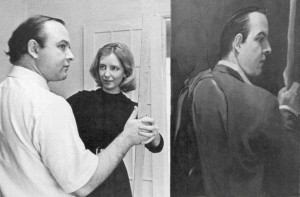 Here, Glenda is painting her multiple perspective portrait of Victor as he watched the OU-Texas football game in 1972.  This larger than life painting was completed in less than three days and is considered one of her most creative portraits.

In 1974, in search of more interpretive applications for her talent, Glenda began to explore the newly emerging images of contemporary women.   After two decades of evolving their liberty, influence, status, and visible presence in politics, film, and fashion women had transformed their iconic and traditional roles into something new and not yet fully defined.  Glenda would contribute to that definition by exploring the confident inner core of feminine psyche that had always been strong regardless of the roles they played or the liberty available.  She addressed the warm, tender, and unconquerable side of femininity, conveying both mastery and mystique into her subjects.  This venue of expression was well received by urban collectors, galleries, and critics, receiving as much respect and press coverage as her portraits in this era.

Her paintings of the seventies were simple, direct, poignant, and glamorous.  By the early eighties, her interpretation of women would become both softer and more elaborate, with infusions of an elegant and romantic style characteristic of Glenda’s own post Victorian roots.