From The Art of Glenda Green

In 1945, just before the Boomers began arriving, Glenda was born in the antique, gentrified town of Weatherford, Texas.   Here, spires of Victorian home still shaped the horizon.  Wealthy ranchers, who had been too dignified to live in a close downwind of their cattle lots, had established this well-crafted town in the nineteenth century.  It was not only styled with Victorian grace, but the quality of life and human care was right out of a Norman Rockwell calendar.  All children were supported with interest by the whole community and no child with talent was spared attention for its cultivation.

At the age of three, Glenda had completed her first oil painting, and from that moment on would draw a flood of attention for developing what was now in evidence.

While perhaps not masterpieces, her childhood paintings before the age of twelve are truly remarkable for the clarity of vision, dexterity, color vitality, and composition for one so young.  Already there is revelation and confirmation of those same attributes which, later in life, will result in her highest quality and accomplishment.  From the beginning her gifts for art were authentically present.

By her early teens, the qualities through which Glenda would excel were imminently present.  Over six decades there have been various levels of success and numerous redefinitions of how she wished to express her art, and yet it all would rest on the same foundation:

1. A bold and certain compositional arrangement that transfigured external reality into her own perception of it.

2. Color that seems to speak a language of its own, driving the senses into greater consciousness.

3. Light that scintillates across surfaces while penetrating them to create a radiant translucence.

4. An inner vision that reduced outer reality to merely an envelope for greater meaning.  Herein her visionary and philosophical nature was already showing its presence.  In a letter to me she expresses this emerging quality perfectly, showing also her dedication to the exploration of consciousness from the very beginning.

“Ching,” Glenda’s childhood cat (This one lived 21 years and appeared in numerous drawings.) In this oldest remaining painting we see that already, at the age of nine, Glenda is aware of the abstract elements of composition. She is not simply depicting her pet, but incorporating its representation within a context of compositional organization and a quilt of sophisticated colors.

According to the artist, “I owe the deepest gratitude to my mother who saw in my crayon work as a toddler something more than mere scribbles.  I had a fascination between connecting the reality “outside” myself with the reality “inside” myself and then making a picture to show others what I saw and felt.  Everyone praised my adeptness of expression and my precocious verbal ability, both of which were well beyond my years.  One of my earliest passions was for reading, and of course, coloring in my Golden Books.   By the time I was three, I was reading at a first grade level, and embellishing all those wonderful stories dramatically.  By my fourth birthday, I had learned a very big word from my older brother who was in college.  It was ‘philosophy.’

I asked my mother what that meant.  She gave me a brief uncomplicated answer, “Philosophers tell us how we know what we know.  Philosophy is what they teach us.”  My reply was, “That’s what I will do.”  And so it was, from the very beginning the art of vision and that of consciousness would be indelibly united for me.”

“My First Horse” is a pastel on board, painted at age 10. Here we see a developing technique for representation and also for special perspective in which diverse objects cohere in a common environment. The use of light and shadow for compositional organization will be a life-long trademark for this artist.

From the time Glenda entered first grade until she graduated elementary school no reasonable expense was spared to cultivate her prodigious gift.  Glenda’s oldest surviving painting was of her cat, Ching, which was painted from life around the age of nine.  That and a few other childhood paintings can be seen on the ‘childhood gallery page.’   These include more life portrayals of her favorite horses and a rather impressive still life.  In addition to advancing technical ability, there is a marked element of imagination pointing toward more poetic interpretations of subjects.

According to her further recollections: “I never choose to paint from photographs, although some of my childhood teachers (local talent) found them to be an expedient way of teaching technique on landscapes and other subjects that could not be brought into the studio.   Every Tuesday afternoon and Saturday morning I spent in the studio of either Mrs. Stanley or Mrs. Brown enjoying my favorite activity and developing more skills for applying it.  The emphasis was not on creativity in those years, but I gained technical confidence and instinctive use of oil paint.  What I can thank those teachers for is a love of the medium and such dexterity of paint and brush that it all became an extension of my hand and self.  This allowed me to envision and create without struggle as I progressed from being a childhood painter to becoming an artist.  Looking back, I would compare this preparation to many years of muscular training before the dance. 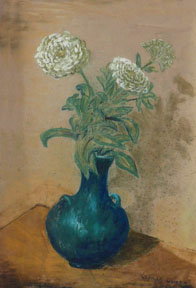 “Still Life with Zinnias” is a pastel on board, painted at age 11. In this we see an even more masterful use of light and shadow for compositional effect. Also, the use of three flowers, each at a different angel narrates the space with a minimum of effort. The intense, yet sophisticated coloring of the vase against a golden wood table is the sign of a colorist in the making.

“At age twelve I was enrolled in the “Art Center School” at the Fort Worth Art Museum, and the dance would begin.  Here for the first time, I came into contact with mainstream professional artists, including two of my future professors at TCU who made their extra hours available to young artists.  At this point, technique became reprioritized to favor visual expression and aesthetic sensitivity.  The technique I had already developed found its higher complement in these new elevations of artistic perception.  It was here that I first learned formal composition, intuitive brushwork, and an appreciation for negative shapes.  In artistic parlance, those are the shapes created by spaces between “things” or delineated by empty spaces so as to take on potent compositional value.  The total ‘gestalt’ of any painting or drawing includes both that which is shown as well as that which is only implied: what is tangibly revealed and what is only suggested by expressive marks or empty space.  Making this leap of consciousness is what I most needed at this time, to rise above mere skill in representation, and to pursue art more expressively and cognitively.”

Her best works from this period were drawings rather than paintings.  In these quicker and more spontaneous works, she found liberation from the laborious renditions on which she was trained as a child.  At last she could enjoy a leap of consciousness reaching for something more intangible.  Only a few oil paintings survive this era, and they do attest to a lingering attachment to early techniques that will be dropped by the time she enters college. 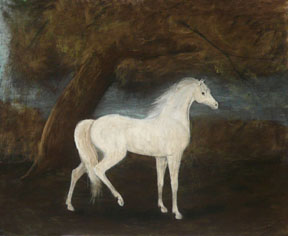 “White Shadow,” is a pastel on board, painted at age 12. This horse was a subject of great admiration and imagination for Glenda. She saw it as her dream horse with magical power, and portrayed it against an evening setting. Rich with subjective and poetic meaning, this is a very advanced intriguing expression for one so young. It shows further progression of abstract thought and intuition.

“These are still some of my favorite works, because my values as an artist were formed in these teenage years.  They evoke memories of much loved people, places, and pets.  Some of them do so with a sensitivity and mastery I could not exceed today.  Even though there was still much to learn, I enjoy reliving through these drawings the freshness and excitement of a career being born.  In my senior year, these paintings and drawings won me a full four-year scholarship to Texas Christian University.  Over fifty of these early works still survive and are catalogued in my private collection.”

College years would demand a special kind of courage for Glenda.  Not only would she be expected to grow in sophistication and mastery, the standards by which her art would be judged would no longer be provincial.  She would now be measured by the best and most successful artists in history.  This was a thrilling and inspiring prospect to her as long as the artists she studied and emulated were from the distant past: Da Vinci, Rembrandt, or Monet.  What became her “beast in the night” were the masters and standards of contemporary art, especially abstract expressionism.  In the 1960s, university art school climates were very avant garde.  To be anything less than on the edge of “the brave new world” was to have no professional future as an artist.

“I was not offended by abstract art.  It’s just that my interests and intellect did not face in that direction.  Nevertheless, it was an unavoidable confrontation with the world.  More than that, it was an encounter with my generation and the context in which I would either succeed or fail to make my stand as an artist.  Although I was granted some room for transitioning beyond provincialism in my freshman year, I would have to resolve a big dilemma quickly if I were to profit from my education there. I would need to find my place in mainstream art, or I would have no place to go.  This did not make for easy relations even though I continued to be an honor student and one of my professor’s favorite challenges.”