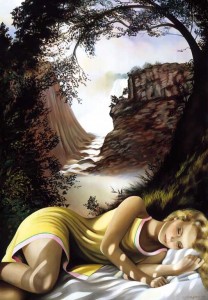 The turn of this decade was launched with a rise into New York gallery invitations and a contract with the leading producer of fine art posters, Bruce McGaw Graphics.  Her poster, “The Flight of Spring” would be one of the bestselling posters world-wide for most of 1980, and that success among others would lead to a firm contract with Bruce McGaw Editions for establishing a print studio on New York City where Glenda would turn out a number of small editions of hand-pulled lithographs.  Significant promotion was devoted to her work with full-page color ads in Art News, Art in America, and American Artist, as well as unscheduled appearances in photo spreads of Better Homes and Gardens and even a major movie.

As chance would have it, the financial recession of 1982 brought a dramatic change.  It deeply affected the north-eastern demographics to which her work was being promoted and collected, which resulted in a redirection for Glenda from New York back to Texas, Oklahoma, and the mid-west.  There, her reputation had been firmly established for ten years and her collectors had not suffered so badly in the market.  This more pastoral and traditional part of the country inspired Glenda with more romantic, reflective qualities that were natural to her personal style. 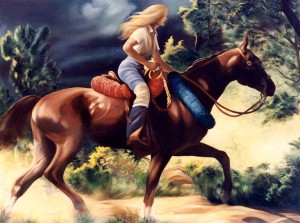 For the remaining eight years of this decade Glenda would never be short of commissions, exhibitions, and press coverage, even gaining text-book status.  One of the most important of her exhibitions was a retrospective of the preceding 18 year.  A retrospective exhibit is a very coveted benchmark in an artist’s career, for it indicates not only significant interest in current work, but the whole of their oeuvre.   (See video below)  Also thanks is given to lenders who at great expense shared their collection of Glenda’s paintings, considering that most pieces in this collection were either in public museums or private collections.

Creatively speaking, Glenda would use these years for integration and assimilation of all the skills and dimensions of style she had developed in the seventies, and even sixties.

Landscape would reappear, if only as a background to figurative work.  Her figures would transcend the iconic images of her seventy’s women to become real women painted with all the style and depth of her portraits a decade ago.  This of course, required that all of their accessories, backgrounds, and meaningful objects the completed the compositions were also more richly painted.  In several instances she even took up the genre of still-life to explore the minute and silent language of objects that can poetically parody a human instigator no longer present. 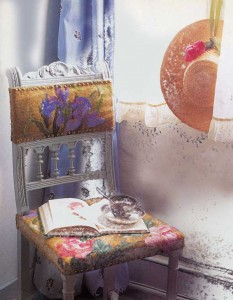 All of these explorations, rich developments, and integrations, combined with a more traditional turn of her life would produce some deeply sensitive and elegant paintings in the eighties.  As a perfect complement to this trend she spent the last five years of this decade on her vineyard in Paradise, Texas.

Artists of the nineteenth century taught us the essential characteristic of Romanticism is highly saturated perception, sensitivity, and meaning, whether expressed through literature, painting, philosophy, or music.  By that definition, this was Glenda’s romantic period.  It would also be her last period to limit her artistry only on the two-dimensional surfaces of paper and canvas.