The Art of Glenda Green
by Chandra Gilbert

Glenda’s academic years preparation began in the late sixties. She first earned her BFA in painting at Texas Christian University.  That was followed in the seventies by three years at Tulane University earning an MA in art history, followed by three more years working as an instructor at Tulane and a Curator of the collections at Newcomb College and the Kimball Museum.

She entered college far ahead of the curve on basic ability.  Classes in life drawing, composition, color, and media usage were a snap.  Straight A’s and Honor Roll placement were earned with little effort, although one critical element of success was not so easily achieved.  That was finding her place within the genre of contemporary art.  For lack of this, her professors often showed great concern and not infrequent criticism.

The college years presented Glenda’s first real challenge in crossing the threshold between being exceptionally talented and establishing her place within her generation of contemporary art.  There were many confrontations with her professors about clinging to what they called ‘provincial values’ and the standards of style she was now expected to embrace.  Her approach to growth was to study the work of contemporary painters she admired, with whom she held some common qualities.  She focused on Andrew Wyeth, Edward Hopper, and Georgia O’Keeffe, because of the way their detailed realism was not so much descriptive as providing compositions focused on broad and simple planes through which the eye was strategically directed by light, shadow, and color.

As she studied their work, she also found a rich supply of subject matter from her home town that would support her own version of their style: antique buildings, southwestern imagery, and character-rich faces of common folk.  The architecture perfectly supported the “Hopper-like” part of her new compositions.  Ghosts from the past and simple resolute store fronts offered many dimensions of perception and reality to coordinate.  What began as studies, however, became unique expressions of subjective discovery.  There was an almost surreal aspect to the way she would allow buildings to merge with the landscape behind, or the way she detailed faces against stark backgrounds, or architectural designs that were hauntingly empty.  She was already exploring how to create an evocative presentation of subjective intensity through the lens of objective reality.  To achieve this she used detailed realism, broad planes of composition, and unexpected shifts of space and perspective.  Most of all she was drawn to light and color.  She knew that light and color were more than sensory perception.  Within that mystical medium was a language unto itself.

She was so fascinated with the exploration of light and color that she took two of her honor’s electives in optics and quantum physics.  What she discovered was nothing less than a new quantum color wheel that explained why simple and obvious harmonies of color could never capture the dynamics of light.  She knew there had to be logic to the way color behaved, and yet the variations she found would satisfy the richest subjective appetite. It would be ten more years, involving collaboration with two advanced scientists, before her theory would be complete. When she did, it would provide a major key to how color shaped our perception of space and other landmarks of consciousness.

Glenda was a very advanced thinker, but not much interested in avant garde art.

“Under extreme pressure to join the contemporary movement I made token gestures toward abstract expressionism, and actually received more praise than expected.  Perhaps it was my strong expressions of color and light that brought forth the accolades.  However, I never had enough motivation to pursue that direction as a career.  Acceptance of that was a major force behind why I switched into Art History for graduate school.  My plan was to wait out the current trend while I studied great art from the past, pursued my research in color, and cultivated my own art privately.  This was facilitated by an extremely generous Kress Foundation Fellowship to Tulane University. “

One irony of her frustration with avant garde pressure is that she was invited to submit a painting for regional, and then national intercollegiate painting competition in 1966, naturally competing with the most accomplished students from around the country in nothing other than contemporary trends.  She won first place with her very Hopperesque version of a back street in Weatherford called “Tornado Warning.”  After her painting traveled around the country for a year to various universities, it returned to the TCU permanent collection from which it was soon lost or stolen. No pictures remain other than one Polaroid photograph that does not do justice to the centerpiece of detailed realism in the stop sign and the clustering of grass and rocks beneath it.

The following are examples of work in the TCU and Tulane years: 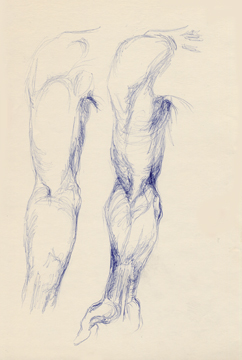 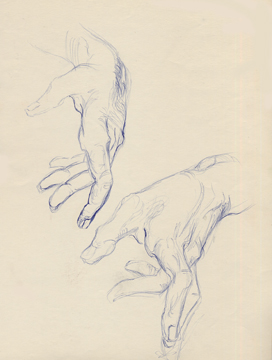 Glenda’s grasp of human anatomy was not only accurate as to detail, but intensely expressing of life and movement.  These freshman drawings foreshadow her later excellence in portraiture and figurative painting.

Antique architecture in Glenda’s home town offered a perfect transition between her familiar ground and the contemporary world she was entering.  The works of Edward Hopper would greatly influence her evolution of style in this period.  That influence can be seen in the empty ghost-like streets and the dark and haunting emptiness behind the windows and doors.  Yet the charm and delightfully tactile realism is typical of Glenda’s interpretation.  Her use of color points for compositional emphasis is very typical for this period. 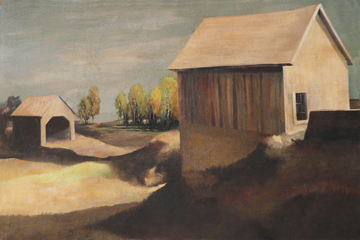 As she pursued this style Glenda found ample room for developing geometrical and planar compositions that were integral to contemporary art in the sixties. 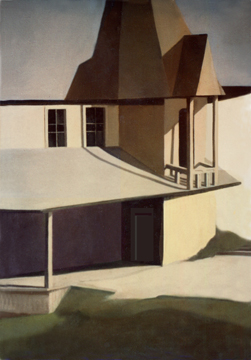 Prairie House is not so much a house or place as it is an Interweaving of two-dimensional and three-dimensional planes to create an almost surreal transformation of reality.  In this painting Glenda has succeeded in developing an abstract basis for realistic composition. 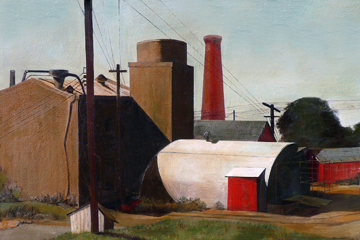 In her painting of “The Old Mill” we see the same kind of intermingling of ground color and brown-baked buildings, of gleaming sky and the rolling brightness of a quonset hut. One space becomes the other, delineated only by high-line wires and service poles.